Making a decision about how to birth a breech baby involves a complex risk calculus. Women have to weigh the short- and long-term benefits to themselves, their babies, and their future pregnancies. This graphic (created for me by Lauren McClain of Better Birth Graphics) shows how planned CS for breech has affected women and their babies in the Netherlands. Verhoveen et al (2005) discuss the effects of the increase in planned CS since the Term Breech Trial, and the results show a risk trade-off. 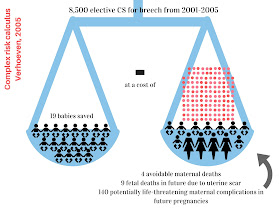 Alternative version of the graphic with text embedded in the image: 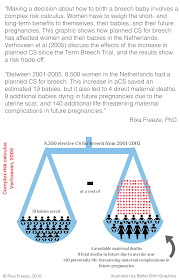