How does the 2000 Term Breech Trial compare to more recent evidence on term breech?

Recent studies do not support the findings of the 2000 Term Breech Trial, a randomized controlled trial that enrolled 2,088 women.

Two large multi-center studies in France and Belgium found no difference in perinatal/neonatal mortality between planned CS and planned vaginal birth. These studies--one prospective, one retrospective--followed a total of 10,200 women and had 174 & 175 participating hospitals.

A meta-analysis and other registry studies have found some advantage to planned CS, but the advantage is significantly less pronounced than in the Term Breech Trial. 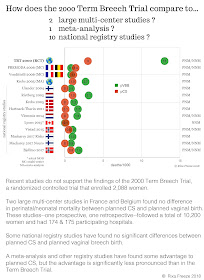