What would happen if all Dutch women had a planned c-section for breech?

Each year around 6,490 women in the Netherlands (40%) still plan a vaginal breech birth. This number is significantly lower than it was before the 2000 Term Breech Trial, where roughly 75% planned a vaginal breech birth and around 50% overall gave birth vaginally to their breech babies (see Rietberg et al 2003). 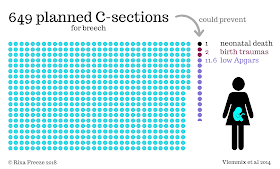 In several national registry studies, planned CS for breech leads to small but measurable improvements in short-term neonatal outcomes (mortality and morbidity). However, these improvements are consistently much smaller than the Term Breech Trial's findings. 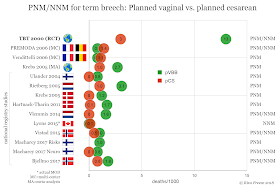 This pressing question remains: at what point do the short- and long-term risks of routine cesarean begin to outweigh the short-term benefits to the baby? How many elective cesareans are justified to save 1 baby? What if women are forced into having these cesareans?

A policy of routine cesarean for breech does not allow women to decide what the acceptable risk/benefit trade-off is. 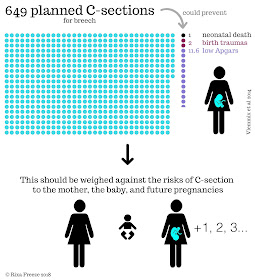